James Donaldson on Mental Health – Suicide Prevention Experts: What You Say (and don’t say) Could Save a Person’s Life

James Donaldson notes: I am turning more and more of my time and efforts towards mental health issues, especially pertaining to our young people and student-athletes.

Having gone through a recent bout of depression and suicidal thoughts myself, I realize now, that I can make a huge difference in the lives of so many by sharing my story, and by sharing various resources I come across as I work in this space.  http://bit.ly/JamesMentalHealthArticle

For every person who dies by suicide, 280 people think seriously about it but don’t kill themselves, according to the National Suicide Prevention Lifeline.

There’s not one answer to what makes someone move from thinking about suicide to planning or attempting it, but experts say connectedness can help.

“Reaching out … can save a life,” said Jill Harkavy-Friedman, a clinical psychologist and vice president of research at the American Foundation for Suicide Prevention. “Everybody can play a role.”

World Suicide Prevention Day on Sept. 10 is of particular note in the United States where suicide rates have increased nearly 30 percent over the past two decades. 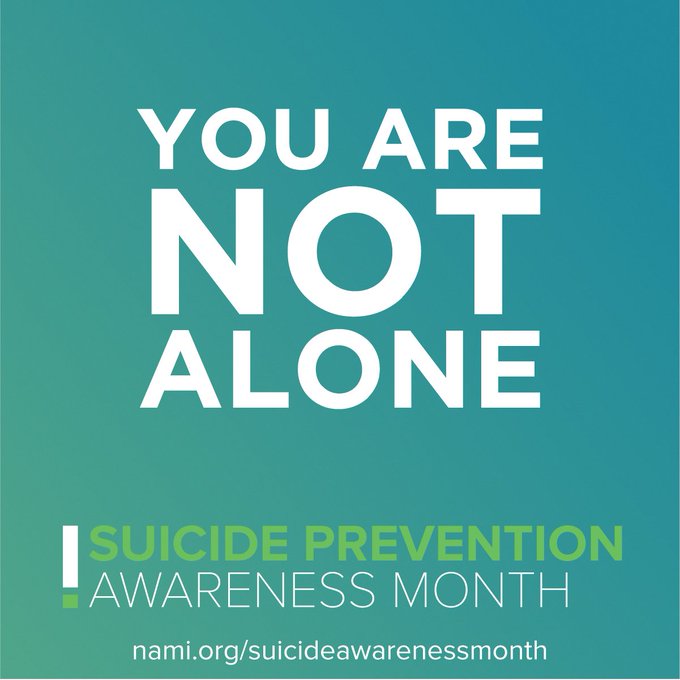 The Suicide Prevention Resource Center reports that these conditions increase a person’s risk:

These warning signs, whether risk factors are known or not, mean you should take action:

You can check in on people based on what you know about them, said John Draper, director of the National Suicide Prevention Lifeline.

“All those warning signs that we’ve listed for what makes a person look suicidal are fairly generic and hard for us to be able to spot unless you’re a diagnostician,” Draper said. “However, you know when a person is having relationship problems or going through a divorce — you know when somebody has a serious financial loss. … These are very human recognizable signs that people could be needing help.”

While experts caution that suicide is never the result of a single cause (bullying, a breakup, job loss), when those events are combined with other health, social and environmental factors they can heighten risk.

The most important thing you can do is look for a change, said April Foreman, a licensed psychologist who serves on the American Association of Suicidology’s board of directors.

“Notice when somebody is different,” Foreman said. “Trust your gut. If you’re worried, believe your worry.”

It’s important to encourage someone who is having suicidal thoughts to call the Lifeline (800-273-8255), find a support group, or reach out to a therapist, particularly one who specializes in evidence-based suicide prevention techniques such as Dialectical Behavior Therapy and Cognitive Behavior Therapy for Suicide Prevention. However, there are also things you can do.

1. Ask. In a private setting, ask the person you’re worried about directly if they’re thinking about suicide. Studies have shown that it does not “plant the idea” in someone who is not suicidal but rather reduces risk. It lets the person know you’re open to talking, that there’s no shame in what the person may be feeling. If a person tells you they’re thinking about suicide, actively listen. Don’t act shocked. Don’t minimize their feelings. Don’t debate the value of life itself, but rather focus on their reasons for living.

2. Keep them safe. Determine the extent of the person’s suicidal thoughts.

“We want to know are you thinking about killing yourself? Do you have a plan? What were you thinking of doing? Do you have the materials to do that? Have you gathered those things? Where are they? What could I do to help you stay around until this passes?” Harkavy-Freidman said.

If a person does have a plan, it’s important to take action to remove the lethal means. (Guns were used in 23,000 of the 45,000 deaths by suicide in 2016, according to the Centers for Disease Control and Prevention.)

3. Be there. If someone tells you they’re thinking about suicide, continue to support them. Ask them to coffee. Give them a call. Some people will eventually stop having suicidal thoughts and feelings, others will continue to struggle throughout their lives.

Deena Nyer Mendlowitz, 40, of Cleveland, is a suicide attempt survivor who has had chronic thoughts of suicide since she was 8 years old. Mendlowitz said one of the moments she felt most supported was when she was going through electroconvulsive therapy and a friend brought her a meal.

“I just felt like I had a regular disease at that point, because they were doing an action they would have done for a friend who was going through anything else,” she said. “And I thought, somebody cares about me in the regular way they care about people.”

4. Help them connect. Encourage them to seek additional support. That could mean calling the Suicide Lifeline (800-273-8255), suggesting they see a mental health professional or helping them connect with a support group.

Jennifer Sullivan, a 21-year-old college student at Worcester State University in Massachusetts, struggled with suicidal ideation as an adolescent. It grew worse after she was raped twice, she said. Joining a sexual assault support group made her feel less alone.

“I met a fantastic group of young ladies,” she said. “One became one of my best friends. When I had feelings of wanting to die or cut I would tell her I was having a bad day.”

5. Follow up. Keep checking in. Call them, text them. Ask if there’s anything more you can do to help.

After a suicide attempt

One of the risk factors for suicide is a prior attempt.

Studies show that suicide survivors often experience discrimination and shame and may struggle to talk about their feelings because they are worried people will judge or avoid them.

“When I started publicly speaking about my experience … people would treat me differently,” said Chief Warrant Officer Cliff Bauman a suicide survivor in the Army National Guard. “Somebody, if he was my friend and we laughed and joked the day before, now suddenly doesn’t know how to approach and talk to me.”

If someone you know is a suicide survivor, in addition to the steps above, the Suicide Lifeline says:

Resources to get help

Suicide Lifeline: If you or someone you know may be struggling with suicidal thoughts you can call the U.S. National Suicide Prevention Lifeline at 800-273-TALK (8255) any time of day or night or chat online.

For people who identify as LGBTQ, if you or someone you know is feeling hopeless or suicidal, you can also contact The Trevor Project’s TrevorLifeline 24/7/365 at 1-866-488-7386.

The Military Crisis Line, online chat, and text-messaging service are free to all service members, including members of the National Guard and Reserve, and veterans, even if you are not registered with the U.S. Department of Veterans Affairs (VA) or enrolled in VA health care. Call 1-800-273-8255 and press 1.